The singer Janet Dawkins was born and raised in London. Already at the tender age of 4 years she started to interpret songs from Shirley Bassey and Ella Fitzgerald for the entertainment and amusement of her family. She had always loved singing, but originally she intended to become a fashion designer, which she studied in London. She returned to her passion – music.

Janet Dawkins appeared in well-known places such as Hammersmith Odeon, Wembley Arena and Manchester Apollo, and she had many recording sessions in various studios. Her first single reached the reggae top 20 charts in London. This was followed by a single production in Italy and a studio project in Germany, which entered the top 30 dance charts. 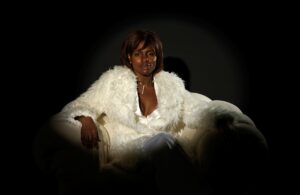 In the meantime, Janet Dawkins has settled down in Switzerland and has sang with formations like Pepe Lienhard Orchestra, the jazz formation Four for the Blues, the Gino Todesco Combo and Jo Geilo Heartbreakers. Janet toured through Europe with the singer Udo Jürgens, and she was on stage with artists international artists like Kool and the Gang and Céline Dion etc.. She composed a corporate song for a large Swiss company together with Gino Todesco, and they performed the song on a European and Far East tour.

Janet Dawkins also appeared over the years as guest lead singer with the DoLord Mauer Gospel Power choir and she also toured with the popular Swiss gospel singer Bo Katzman and his choir as special guest. She performed gospel and soul classics with powerful ballads, which touched the hearts of the audience.

She covers a wide musical spectrum ranging from jazz and gospel to soul, R&B and dance music. Because of her warm and soulful voice, she is often referred to as “The Singer With The Golden Voice”.